Why is racism so abhorrent? 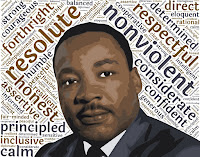 Before we discuss this commonality, let's clarify just what racism is. Racism is based upon the root word "race" - which means, according to the Collins Dictionary:


"a group of people of common ancestry, distinguished from others by physical characteristics, such as hair type, colour of eyes and skin, stature, etc."

Okay, so what do each of these features have in common with each other?

We can say, for example, that racism is specifically about skin color. But according to this definition, that would not fully cover its meaning. Yes, racism certainly includes skin color, that that's not all.

Or we could say that it is about eye color and/or hair color. Or country of origin. Or stature - including memberships within any particular faith. Yes, these would also be correct, but these characteristics are only elements of racism.

We could also say that racism is about ancestry. That would again only be partially right. One's family origins - whether defined by history, region or language - does not completely capture the full extent of racism.

What is the common element of racism?

The common element in racism is the incorrect assumption that all we are is a physical body. Flesh and blood only. There is nothing else within.

This is why people become racist: Because they mistakenly identify themselves and others as merely a physical body.

Such a mistaken notion assumes we have no deeper identity. It assumes our identity is only composed of the physical traits and characteristics of this temporary physical body. And nothing else.

What's wrong with assuming we are these bodies?

What's wrong with assuming we are only these physical bodies and nothing else? This means there is no deeper element to our existence. In such a scenario, a mannequin or robot would be equated with a living person. Or a dead body would be considered the same as a living person.

Such scenarios are considered grotesque and nonsensical to most of us. Most of us can immediately feel an innate difference between a dead body and a living person. In the same way that a mannequin would be innately differentiated from a living person.

This last characteristic, love, is specific to this element of life: Love allows us to accept each other as equals despite differences in our skin color, eye and hair color, ancestry, country of origin, faith and so on. The ability to love is the universal attribute that allows us to accept each other on the basis of equality despite any differences in our physical bodies.

So where does this characteristic - the ability to love - come from? It comes from our deeper person. One that the physical eyes cannot see. Our deeper person that has a composition unseen and untouched by the senses.

What is this composition that cannot be seen or touched by the senses? Whether we call it the soul or the spirit, or deem it spiritual or metaphysical, this is our innate composition: Deeper than the physical body. More profound than flesh and blood.

Email ThisBlogThis!Share to TwitterShare to FacebookShare to Pinterest
Labels: 18. Why is racism abhorrent?
Previous Next Home